Atrial fibrillation (AF) is a common cause of stroke, especially ischemic stroke. So far, all available data that demonstrate a beneficial effect of oral anti­coagulation for stroke prevention have been collected in populations with AF documented by conventional ECG recordings. It is well established that a large proportion of AF episodes remain undiagnosed (“silent AF”), and many of these patients present with a stroke as the first clinical sign of AF. In fact, 5% of unselected stroke patients present with unknown AF when admitted to a stroke unit, and another 5% will have undiagnosed paroxysmal AF on 72-hour ECG monitoring.

Earlier initiation of anticoagulation could prevent stroke and systemic embolism, and reduce cardiovascular mortality in patients. This needs to be balanced against the risk of bleeding associated with anticoagulation therapy, estimated at 2-4% per year on non-vitamin K antagonist oral anticoagulants (NOACs). Prolonged ECG monitoring and particularly rhythm monitoring at unlimited duration using implanted devices can detect atrial arrhythmias (AA) including atrial AF. For continuous monitoring, it is unclear whether these biological signals (atrial arrhythmia detected by continuous monitoring) identify a group of patients who benefit from oral anticoagulation. For patients with implanted devices, this is currently tested in the NOAH – AFNET 6 and ARTESiA trials.

Only a minute proportion of the population has an implanted device, leaving most at-risk populations without access to monitoring. Hence there is a societal need to test anticoagulation initiation based on monitoring that is accessible for a larger proportion of the at-risk population. There are more smartphones than people on earth. Smartphones and increasingly wearables are widely used in the population and they can be used to detect rhythm abnormalities, albeit with limited specificity and sensitivity compared to medical devices..

The existing studies evaluating smartphone-based screening for AA used ‘opportunistic screening’ in populations who already own a smartwatch, thus screening younger, tech-savvy, and affluent populations. Screening for undetected AF is, however, mostly needed in elderly populations with concomitant cardiovascular conditions in whom the risk of AF is higher and the risk of AF-related complications is increased. Hence, we propose to test the hypothesis that low-threshold, accessible screening for AA in at-risk populations, offering a wristband combined with a robust algorithm analysing biosignals from smartphones and wearables, detects AA in an elderly population. 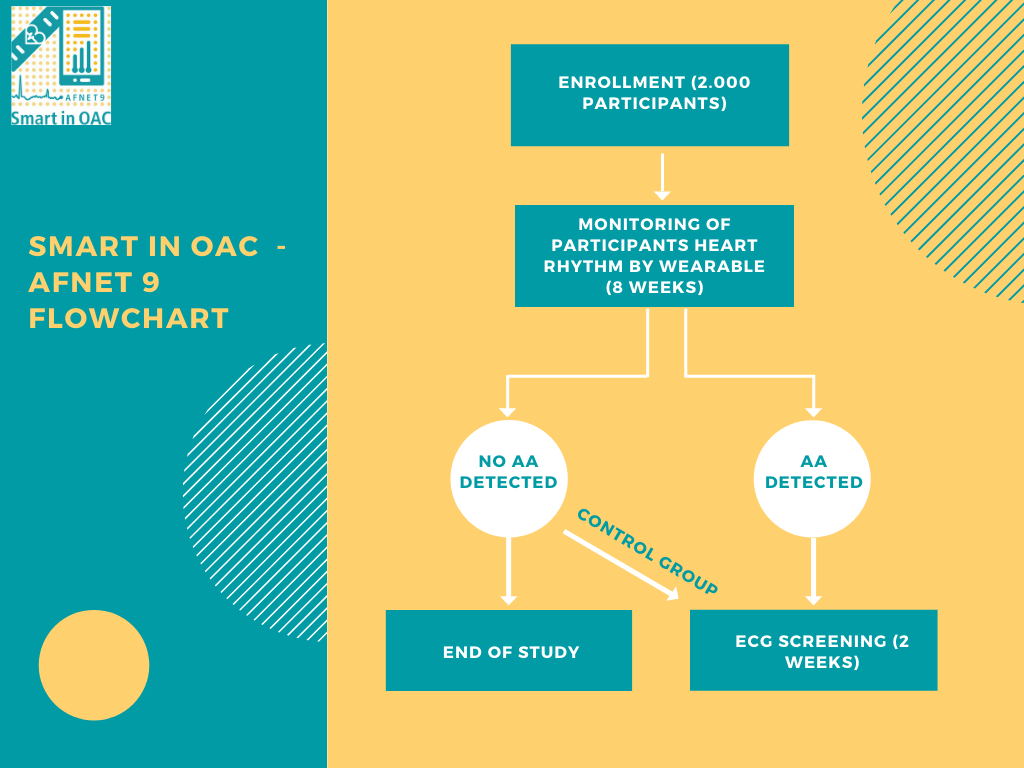 As a physician you may – If qualified accordingly – participate in AFNET trials.